As I mentioned in the previous post, we hosted our very first team this past week.  Kerby and Jason are the official team leaders this year and are in charge of organizing and working with most all of the 20-some teams that come through the Abraham Project in a year.  But this team was made up of three families from First Presbyterian Church of Bellevue where Joe used to work, so it was only natural that we would ‘host’ them.
The team was made up of six parents and their nine kids and they came for four days to work and serve at the Project.  In addition to the 1,000 count Easter egg hunt they organized on Sunday, they worked on sanding, priming, and painting the metal fence by the children’s homes as well as facilitating crafts with the daycare kids and children’s homes kids.  It was a special treat for us to have people from our hometown come and it was especially gratifying to see how these parents were setting examples for their kids in what it means to serve and give back.  The parents and kids alike have great hearts and were such a blast to hang out with.
Crafts at La Guardaria (daycare): 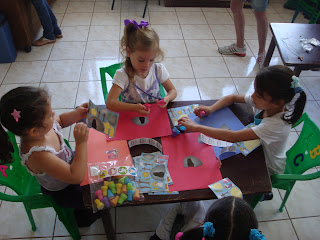 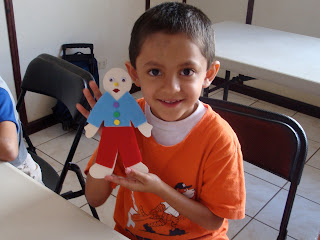 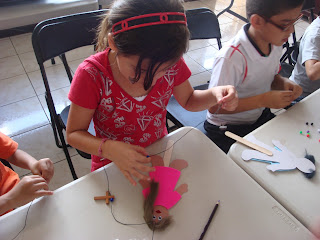 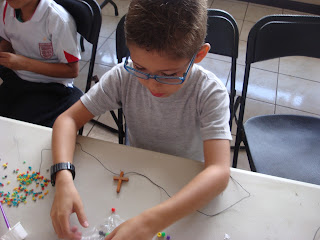 Paint the Fence.  Wax on, wax off.  The boys and men, and then later the girls and ladies joined in to help paint this tall metal fence that borders the river behind the Project: 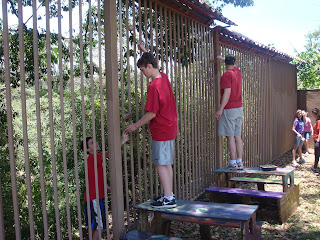 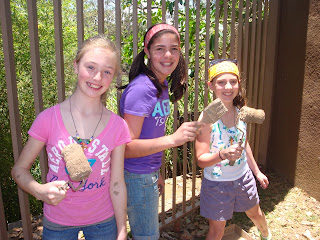 Crafts at the Children's Homes.  One kid (the oldest in the homes) was so into decorating a butterfly with sparkly puff paint that he spent an hour on it! 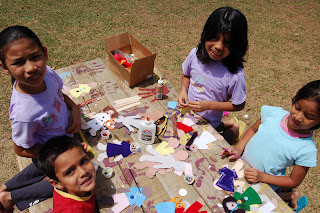 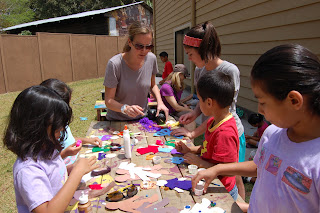 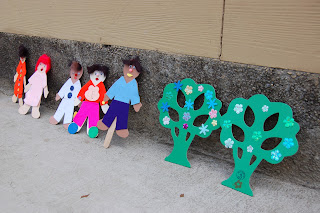 We took an afternoon trip to the Valley of Orosi with the team on Tuesday, where there is an ancient church.  We also ate at a typical Costa Rican restaurant overlooking the valley:
At the same time our team was here, there was another big team from Kentucky who helped pour the concrete on the 'cancha', among many other things.  Now the floor/sport's field is finally done!
In closing, we were so blessed to meet and get to know these wonderful families from Bellevue.  The Abraham Project was also blessed by their presence and willingness to carve out time out of their lives to come and serve!

Posted by Tres Rios Project: Joe and Jennie Westfall at 6:22 PM No comments:

We made it back to Costa Rica just in time to celebrate Semana Santa, or Holy Week, the week leading up to Easter.  Being a Catholic country, this is a pretty important week here.  Kids are out of school. Grown-ups get time off work.  Families head to the beach.  Everything is closed on Good Friday (except Walmart – they just can’t miss a day of making a profit I guess)…. After a grueling red-eye flight back on Monday/Tuesday night, we rested and unpacked for a couple days and then joined in the festivities.  Here’s a recap in pictures: (and can I just say for the record that these photos took over an hour to upload onto the blog because our internet connection is so dang slow down here!)
On Thursday we headed to a Recreation Park across town with Gringo and Tico friends.  Kate had a blast playing with her friends, swimming in the pool with her water wings, and going down her first 'water' slide (it was a pseudo water slide, but hey, she liked it!).  It was also fun to see all the Tico families out enjoying themselves, since most everyone has Thursday and Friday off of work here during Holy Week.
On Saturday morning, we went over to one of the children's homes to just hang out with our friends Candace and Aaron and all the kids.
Easter Sunday. Ok, weirdly enough, there was no church service today.  But we had our first team that we are in charge of come in last night (from Bellevue, WA) and today there a big Easter egg hunt that they had planned.  So the day was festive anyway.
And that was our Semana Santa.  I hope all of you had a very Happy Easter.  He is risen!
Posted by Tres Rios Project: Joe and Jennie Westfall at 8:05 PM No comments: